Cheese during pregnancy is a bit of a minefield!

One of the cheeses that often cause confusion is Halloumi, in fact, as a midwife, I was probably asked can pregnant women eat halloumi cheese on a daily basis!

In this post we’re going to take a look at if it’s safe to eat during pregnancy and what you need to watch out for should you choose to eat it. 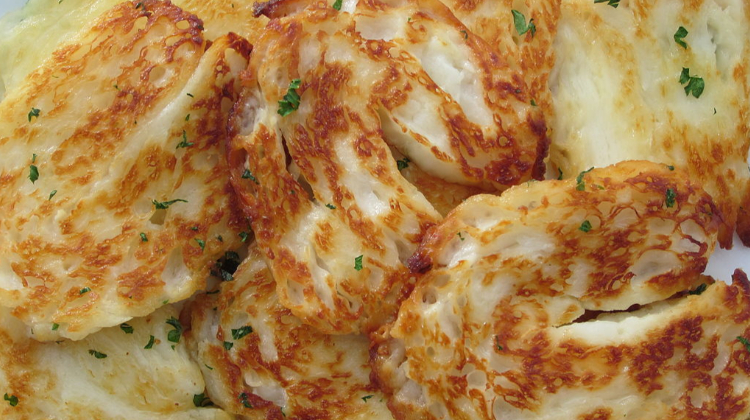 Yes, halloumi cheese is safe to eat in pregnancy, however, it should be made from pasteurized milk and cooked first.

Halloumi is currently listed as safe to eat on the NHS website and is a great source of calcium, vitamins A and B, magnesium, selenium, and Zinc which are all crucial minerals during pregnancy.

However, as you’d expect from cheese it’s also packed full of fat (some saturated) and salt which makes it more of an occasional treat to be eaten in moderation rather than something you should feast on every day.

Why Halloumi Should Be Made With Pasteurized Milk

Halloumi (also called Haloumi or Helim) is an interesting cheese – it’s not a soft cheese (not safe) and it’s not a hard cheese (safe to eat) which is the main cause of confusion.

The general rule is so long as your halloumi is made from pasteurized milk then it’s safe to eat.

Most mass-produced halloumi is made from pasteurized cow, goat or ewe’s milk, however, not all brands are made this way so you should always check the label.

Traditional Halloumi is off the menu as it’s normally made from unpasteurized goat’s or ewe’s milk.

As a general rule of thumb – supermarket Halloumi is normally safe to eat but always check the label and traditional halloumi is not safe so is best avoided.

Which Halloumi Brands Are Pasteurized?

We’ve started to compile a list of Halloumi brands that are safe to eat (again, always check the label yourself):

Can I Eat Halloumi Raw?

So long as it’s pasteurized you can but I’m not really sure why (cravings maybe?).

Halloumi is best when it’s been cooked on the grill for a few minutes on either side.

Does Nando’s Use Pasteurized Halloumi?

Nando’s Halloumi is made from pasteurized cheese making it safe to eat.

So long as the cheese is pasteurized then Halloumi fries are safe to eat.

Here are some of our favorite ways to eat Halloumi:

Can pregnant women eat halloumi cheese? Absolutely, so long as the cheese is pasteurized it’s safe to eat at any stage of your pregnancy. Do keep in mind, however, that due to the high fat and salt content it’s more of an occasional meal.