Can You Eat Ham While Pregnant? What Are The Risks And Is It Safe?

Can you eat ham while pregnant? In this post, we take a look how safe it is to eat ham during your pregnancy and what you need to know. 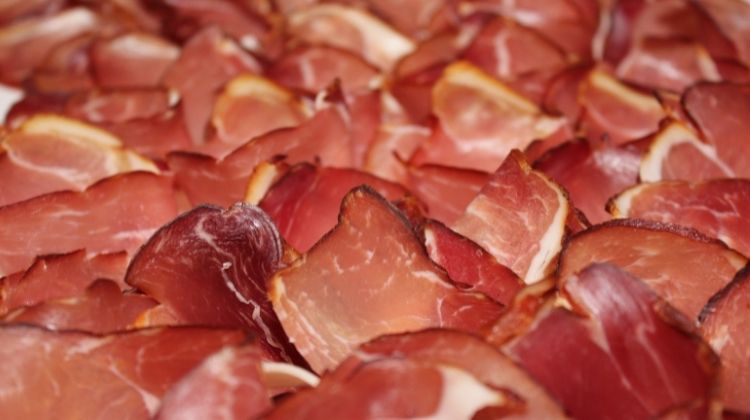 Over the last couple of years I’ve written about a lot of pregnancy safe (and unsafe) foods which is why I completely understand the utter confusion that women have when it comes to understanding can you eat ham while pregnant. Very few other foods are as confusing as this deli favourite.

So without further ado, let’s find out!

Contents show
1 Can You Eat Ham While Pregnant?
2 What Types of Ham You Should Avoid in Pregnancy?
3 Why Should Pregnant Women Avoid Deli Ham?
4 Can I Eat Pre-Packaged Ham (Like Sliced Ham) In Pregnancy?
5 Can Pregnant Women Eat Baked Hams such as Christmas Ham?
6 Can I Eat A Grilled or Toasted Ham Sandwich or Croissant When Pregnant?
7 Is Tinned / Canned Ham Safe To Eat in Pregnancy?
8 The Final Word
8.1 You Might Also Like

Can You Eat Ham While Pregnant?

Hot cooked ham is safe to eat during pregnancy, cured ham should be avoided and cold, cooked ham is best avoided too due to the risk of listeria.

See, I told you this wasn’t a straightforward foodstuff. Fear not, below you’re going to learn what types of ham to avoid, if deli ham is safe and whether pre-packaged ham is safe to eat.

What Types of Ham You Should Avoid in Pregnancy?

As there are so many gray areas when it comes to ham, let’s start by looking at those types of ham that are unsafe to eat.

The rule of thumb is that if it’s cured or air-dried then it’s unsafe. This includes:

Air-dried or cured hams are at risk of parasites such as Toxoplasma gondii due to them not technically being cooked.

While the curing process does go a long way to killing all the harmful parasites in the meat, there’s still a small chance that they can survive. The good news is that if you toss the meats into a frying pan and cook them, you kill the parasites and any listeria that might have been hiding in the meat making them safe to eat.

As with cold hot dogs, the biggest risk when it comes to deli ham is listeria. If you're buying ham from a supermarket, there is a risk of cross-contamination both in the refrigerated display and on the slicing machine. The other risk to pregnant women is if listeria is present. Hams are usually carved off the bone or joint, or are pre-cut in a deli.

As a general rule, microwaving the ham for 30-60 seconds will heat the meat to the 'steaming hot' temperature that makes it safe to eat. If you're checking with a meat thermometer, it should have an internal temperature of 165F, or 75c.

Can I Eat Pre-Packaged Ham (Like Sliced Ham) In Pregnancy?

Based on our research, the guidance around pre-packaged ham differs from country to country. In the US and Canada, while it’s acknowledged that the risk is low, the advice from the American Pregnancy Association is that pre-packaged ham is best avoided.

In the UK however, the NHS regard ham as safe to eat. My view is that if you have any doubt about whether you should eat something or not always err on the side of caution.

Can Pregnant Women Eat Baked Hams such as Christmas Ham?

All baked hams such as those traditionally served at Christmas are safe to eat during pregnancy. So long as the meat is cooked to an internal temperature of 165F or 75C then the meat will be free of parasites and listeria.

Can I Eat A Grilled or Toasted Ham Sandwich or Croissant When Pregnant?

So long as the ham is warmed to around 165F or 75C then it’s safe to eat in a grilled or toasted sandwich.

Is Tinned / Canned Ham Safe To Eat in Pregnancy?

Tinned or canned ham is safe to eat as the contents are pasteurized at the point of canning which kills off any bacteria.

Can you eat ham while pregnant? Hot, cooked ham is fine to eat while deli and cold cooked ham are best avoided due to the listeria risk.