Can You Eat Hot Dogs While Pregnant? Are They Safe?

Ah the humble hot dog, during her pregnancy my sister craved them probably more than any other food. However, the advice on can you eat hot dogs while pregnant isn’t always so clear.

In this post we’re going to take a look at if you can eat hot dogs during pregnancy, which type are safest to eat and how to properly cook them to ensure you’re not risking your health.

Can You Eat Hot Dogs While Pregnant?

Yes, you can eat hot dogs while pregnant so long as they are cooked to an internal temperature of 165f/75c and are hot when served. Never eat lukewarm hot dogs as these can contain harmful listeria.

For best results, you should grill or microwave your hot dogs (or bratwurst, bockwurst, and frankfurters) to remove any risk of listeria from them. 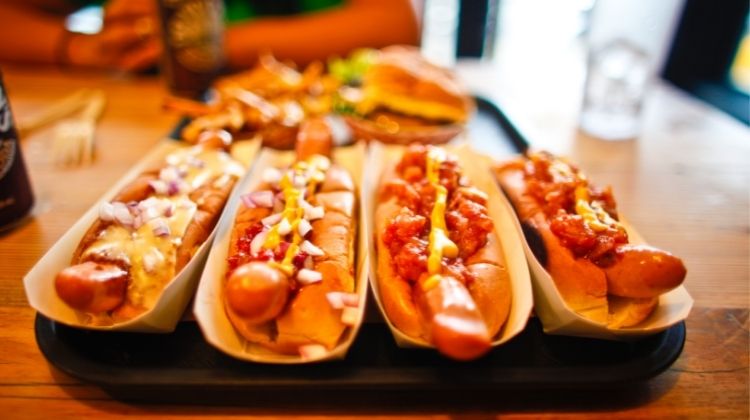 What Kinds of Hot Dogs are Safe to Eat in Pregnancy?

Most of us know that hot dogs aren’t made from prime cuts of meat, rather, they are made from processed or reconstituted meat which is probably one of the reasons so many people ask can you eat hot dogs while pregnant.

It’s not the quality of the meat that has anything to do with whether they are safe to eat or not but to do with if the hot dogs contain Listeria monocytogenes, a harmful bacteria that causes listeriosis – a serious concern during pregnancy!

As we mentioned up-top, to kill the bacteria, hot dogs must be cooked to an internal temperature of 165f/75c.

There are a couple of methods for checking if the hot dog has been properly cooked or not.

The first and most precise is to use a meat thermometer which you probe into the hot dog and it gives you an internal temperature reading.

That’s not always convenient as you’re probably not going to take your meat thermometer to a friends backyard BBQ! A more straightforward but less precise way to check is that the hot dog should be steaming or even impossible to initially take a bit out of due to it being so hot.

While not a scientific method, chances are if it’s too hot to take a bite then it’s properly cooked.

One thing to watch out for is when cooking hot dogs from frozen, particularly if they’re going to be grilled. Due to the different speeds that frozen things cook, the outside might look charred while the inside is still frozen. In these cases, it’s always best to break out the meat thermometer to check.

What Kind of Hot Dogs Are Unsafe for Pregnant Women?

So what kind of hot dogs are unsafe for pregnant women to eat? The basic rule here is any hot dog that isn’t hot is unsafe to eat. For example:

So basically, unless it’s straight off the grill, don’t risk it!

Yes, pregnant women can eat hot dogs from tins, jars and cans so long as they are cooked thoroughly to kill any harmful bacteria.

How to Cook Hot Dogs to Make Them Pregnancy-Safe

Cooking hot dogs to make them pregnancy-safe is pretty straightforward and the below should act as a good general guide, but remember to always check the packet or jar before cooking as this will contain more precise instructions.

The two key things to remember when cooking hot dogs is to ensure they’re piping hot and that they aren’t allowed to sit for too long.

The reason pregnant women can’t eat cold, raw or uncured hot dogs is due to the risk of listeria (Listeria monocytogenes). While all hot dogs are pre-cooked in the factory, there is still a risk of the product becoming contaminated with listeria.

When you cook hot dogs to 165f/75c ,it kills the listeria bacteria which is why they are safe to eat, however, the bacteria can still survive if they aren’t cooked to this temperature which is why you should always ensure they are hot!

Hot dogs that have been cooked but allowed to cool are also a risk as despite being cooked to a high enough temperature, they can become contaminated again while left in the open.

What To Do If You Eat Raw/Uncooked Hot Dog

If you’ve accidentally eaten a raw or uncooked hot dog then there are a few things to watch out for:

The first is flu-like symptoms such as nausea, headache and fever.which are often (but not always) a symptom.

Next, if you feel unwell at all you should consult your doctor and let them know you ate a raw hot dog – from here they’ll be able to give you more advice and monitor you more closely.

Can I Eat Hot Dogs In The First, Second and Third Trimesters?

So long as it’s cooked properly and not allowed to cool, hot dogs are safe to eat during any stage of your pregnancy.

What you should consider however is that they aren’t the most nutritionally beneficial food so should be seen as a treat and not a staple of your diet.

So there you have it, hopefully you now have a clear answer to can you eat hot dogs while pregnant and know what to watch out for when you’re at a BBQ.