Can You Eat Popcorn While Pregnant? Is It Safe?

Can you eat popcorn while pregnant? In this post we find out if it's safe and tell you exactly what to stay away from. 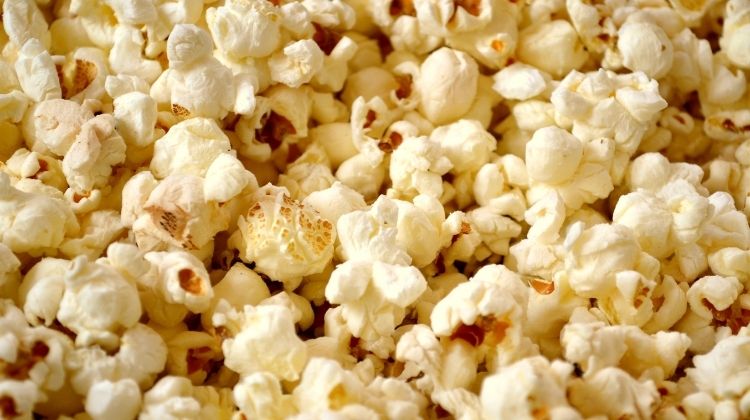 Once seen as a treat to enjoy while watching the latest Hollywood blockbuster, popcorn has evolved from a sugar ladened cinema staple to a healthy alternative to chips and candy. In this post, we look at if can you eat popcorn while pregnant.

You’re also going to learn more about the types of popcorn you can eat and the ones that you’ll really want to avoid for a number of reasons.

Contents show
1 Can You Eat Popcorn While Pregnant?
1.1 What Popcorn Is Best During Pregnancy?
2 Is Microwave Popcorn Safe to Eat in Pregnancy?
3 Is Cinema / Movie Theater Popcorn Safe For Pregnant Women?
4 Is Popcorn Good for Morning Sickness?
5 Can I Eat Popcorn With Gestational Diabetes?
6 The Bottom Line
6.1 You Might Also Like

Can You Eat Popcorn While Pregnant?

Yes, you can eat popcorn while pregnant. High in fiber and low in calories, popcorn can make the ideal healthy snack. That said, you want to look out for those brands with little to no coating or salt as these aren’t ideal when eaten in large quantities due to the fat content.

What Popcorn Is Best During Pregnancy?

Without a doubt, the best popcorn to eat during pregnancy is homemade air-popped popcorn. Containing very little oil, it’s a fantastic source of fibre and wholegrains.

The worst type to eat is cinema style popcorn as this is usually covered in caramel making it high in sugar and fat which are best avoided during pregnancy.

Plain air-popped popcorn also makes for a great base to allow you to add your own toppings to.

Is Microwave Popcorn Safe to Eat in Pregnancy?

While the FDA currently regard microwave popcorn as safe to eat, there is a school of thought that advises caution due to the use of PFCs and Diacetyl.

Pre-2016, microwave popcorn bags were made using a greaseproof chemical called perfluorinated compounds (PFCs) which prevented the popcorn coating seeping through the bag during the cooking process.

After the ban, manufacturers have moved to use a new version of PFCs which are currently deemed safe.

Microwave popcorn also contains traces of Diacetyl, a chemical used to create the flavor which has been linked to lung cancer.

While safe in small doses, long term exposure has been linked to health problems.

For those reasons above, you might want to avoid microwave popcorn during pregnancy, especially when air-popped is so tasty!

So long as there are no other harmful ingredients used for coatings then cinema style popcorn is fine to eat. That said, before you start wolfing down buckets of the stuff you need to understand the calorie content.

Ultimately though, a moderate serving of movie style popcorn every now and then isn’t going to do you any harm.

Is Popcorn Good for Morning Sickness?

Yes, some women do find slightly salted air-popped popcorn to be helpful in treating morning sickness.

Can I Eat Popcorn With Gestational Diabetes?

Popcorn is a low GI, low calorie, high fiber snack which makes it an option for those with gestational diabetes. However, you still need to take care not to over do it due to the carbohydrate content.

Again, stick to air popped popcorn and avoid both cinema and microwave as these are often high in sugar which is obviously a big no-no.

So can you eat popcorn while pregnant? Absolutely, so long as you try and stick to air popped popcorn and avoid the more unhealthy cinema and microwave styles.